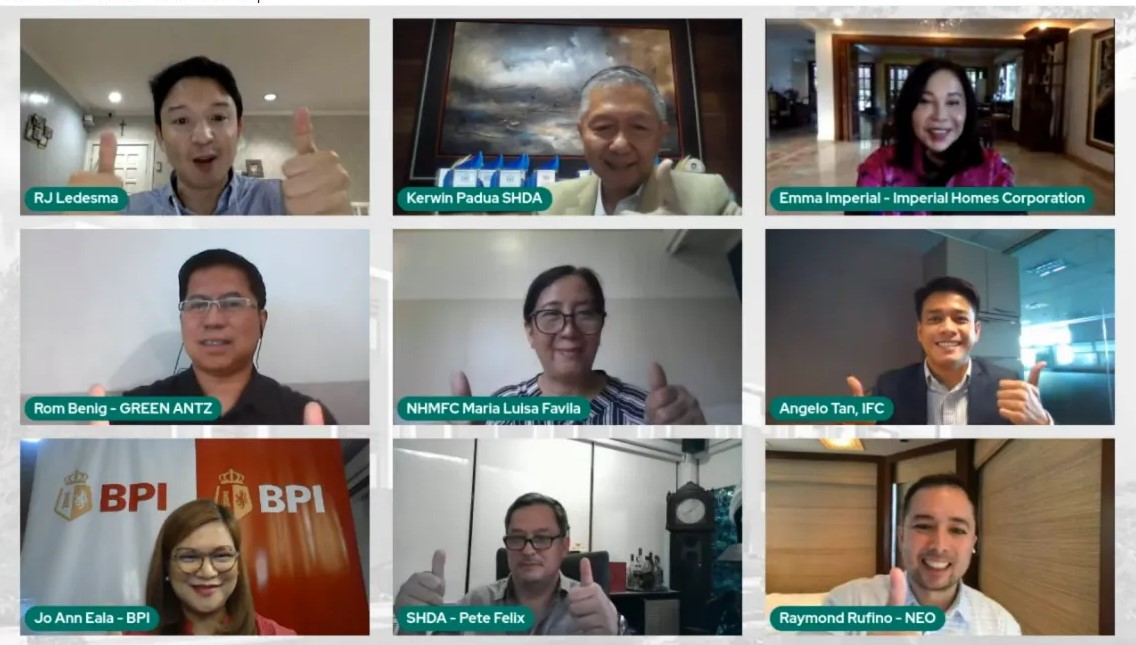 Written by Mark Virtucio on November 5, 2021. Posted in News and Events

Written by Mark Virtucio on May 21, 2020. Posted in News and Events 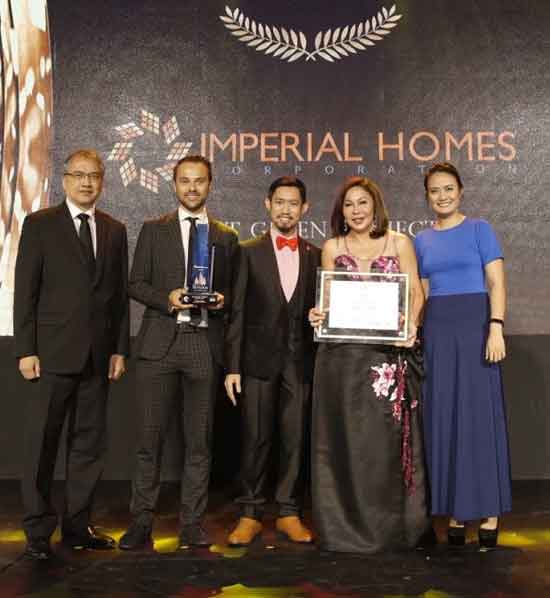 Leading with a Vision for Inclusive Property Technology and Sustainable Innovation

ByMaan D’Asis Pamaran
February 17, 2020
Woman leader Emma Imperial innovates to give Filipinos eco-friendly resilient world class homes of their own. It does not always happen that one finds his or her own true north star. Ms. Emma Imperial surely found hers and this legacy of lifetime homes is something that all of us should aspire for.
Resilient Green Homes for 265 Years: A Legacy for The Next Generation Aside from entry-level pricing in the market, Imperial Homes, the PropTech company that Emma founded, makes sure that houses they build last for a lifetime. Connovate, Imperial Homes’ technology partner has developed a concentrate that makes concrete incredibly stronger than traditional building system with longer service life. Connovate panels boast a strength of 14,000 psi or 20 times stronger than hollow blocks. More importantly, it’s green due to its low carbon footprint. According to a study by Connovate conducted by Technical University of Denmark (DTU), this reinforced concrete “can last for 265 years”. At the same time, it is sustainable because not as much concrete is needed for buildings. You use half as much concrete and it lasts longer. Therefore, it should reduce Co2 emissions by at least 50 percent. Prefabricated slabs, which are easier to install compared to the traditional method that combines hollow blocks and cement, are made of non-porous materials that end up with glass-like product and are resistant to molds. This keeps every Filipino home healthy as it prevents bacteria from spreading. Connovate is earthquake, typhoon and fire-resistant. This technology was designed for upscale houses and buildings in Europe, but Imperial Homes’ solid partnership with the Danish company has made it accessible for a wider market. Imperial Connovate to Developers and Builders :  The Name of the Game is Speed Connovate ultra high performance concrete building technology dramatically improves process efficiency which rationalizes its over-all development cost.  Developers will benefit from shorter construction timelines (as much as 50%) and faster revenue recognition. Imperial Connovate eliminates rectification cost on surface preparation, electrical and mechanical embedment. Wastage, pilferage and idle time are also avoided, boosting corporate governance.

A Career of Helping Others Emma started building projects in the remotest provinces in Bicol region, where she raised her family after marrying the late Legazpi City Mayor Gregorio S. Imperial. It was through him that she developed a heart for public service. She says, “My late husband was a very simple, dedicated, non-controversial man. I am also a UP graduate, and it inculcated in me a lot of idealism. I think my personality evolved because of these influences.” Some of her first endeavors included setting up a Montessori school in the province to bring better learning methods, along with a poultry farm that supplied Bicolano businesses and households. “We did the First Legaspi City Public School Teachers Housing communities in the Country with Pag-IBIG Fund.” Imperial Homes then partnered with innovative solution providers such as Connovate from Denmark for their building Technology and Enfinity Global for solar energy. With a strong independent board of directors including Marife Zamora, Alex Vergara and Ric Pascual as her support group, she is surely set to conquer the property technology development, here and Asia Pacific region.  Powered by Passion With the knowledge that her buyers work hard for their home investments, Emma constantly innovates her housing products to ensure that she offers the best value. One of the biggest achievements for Imperial Homes’ solar-powered communities are electricity cost savings. “Seven years ago, solar was too expensive for ordinary Filipinos. A lot of people thought that I was wasting my time, but I really wanted to make a huge difference.  I found a Belgian supplier and we installed panels that could supply 50 watts with battery just enough to light five lights in a house.” People doubted her solar solutions for residential communities, but the devastation of Typhoon Reming in Bicol and the support of PAG IBIG Fund financing changed their minds. The green initiatives of HDMF CEO Mr Acmad Moti to finance solar solutions for all its members made it accessible to the low income market. With cheaper electricity from solar rooftop panels, Homeowners started buying 10 cu. refrigerators,  TVs, washing machines, toasters, and some even installed air-conditioners with electricity bills ranging between P200 to P300 a month! What’s more fascinating was, they discovered that a number of residents established small food businesses. First Net Metered Solar Powered Community Imperial Homes Corporation’s Via Verde, the Philippines’ First Solar Powered Community, has recently been transformed into the Philippines’ First Net Metered Community. Spearheaded by another dynamic Filipina leader ERC Chair Agnes Devandera, the Net Metering Program is a non-fiscal incentive mechanism, which enables ordinary electricity consumers to become “prosumers” or electricity users that can generate electricity for their own consumption and sell any excess generation to the distribution grid simultaneously. Under the new Net Metering Rules, the program will become more accessible to consumers due to the removal of the Distribution Impact Study (DIS) fee and the adoption of Distribution Utilities’ (DU) blended generation cost to avoid higher electricity costs for consumers. It also shortened processing time for applications.  Starting a green movement The integration of green building technology and renewable energy contribute to sustainability compliance requirements for publicly listed companies. Her success with her cost-effective and eco-friendly initiatives has recently garnered the EDGE recognition from no less than World Bank and International Finance Corporation, first in 2015 and again in 2019. EDGE, stands for Excellence in Design for Greater Efficiencies, an online platform that sets a green building standard and a certification system for over 150 countries that helps to determine the most cost-effective options for designing green within a local climate context. As the first Property Technology Developer, Imperial Homes is encouraging more developers to join the movement of thinking and acting green. “There is only one planet that we can leave to our children. We cannot simply think about profit all the time. We have to think about the next generation. As a woman leader and a mother, I find it very important to always have a positive impact in our endeavors” Follow us on Facebook at Imperial Homes and IG @imperialhomescorp. For inquiries & reservation Call: 0998 583 2286 | 0977 8549632

Written by Mark Virtucio on February 17, 2020. Posted in News and Events 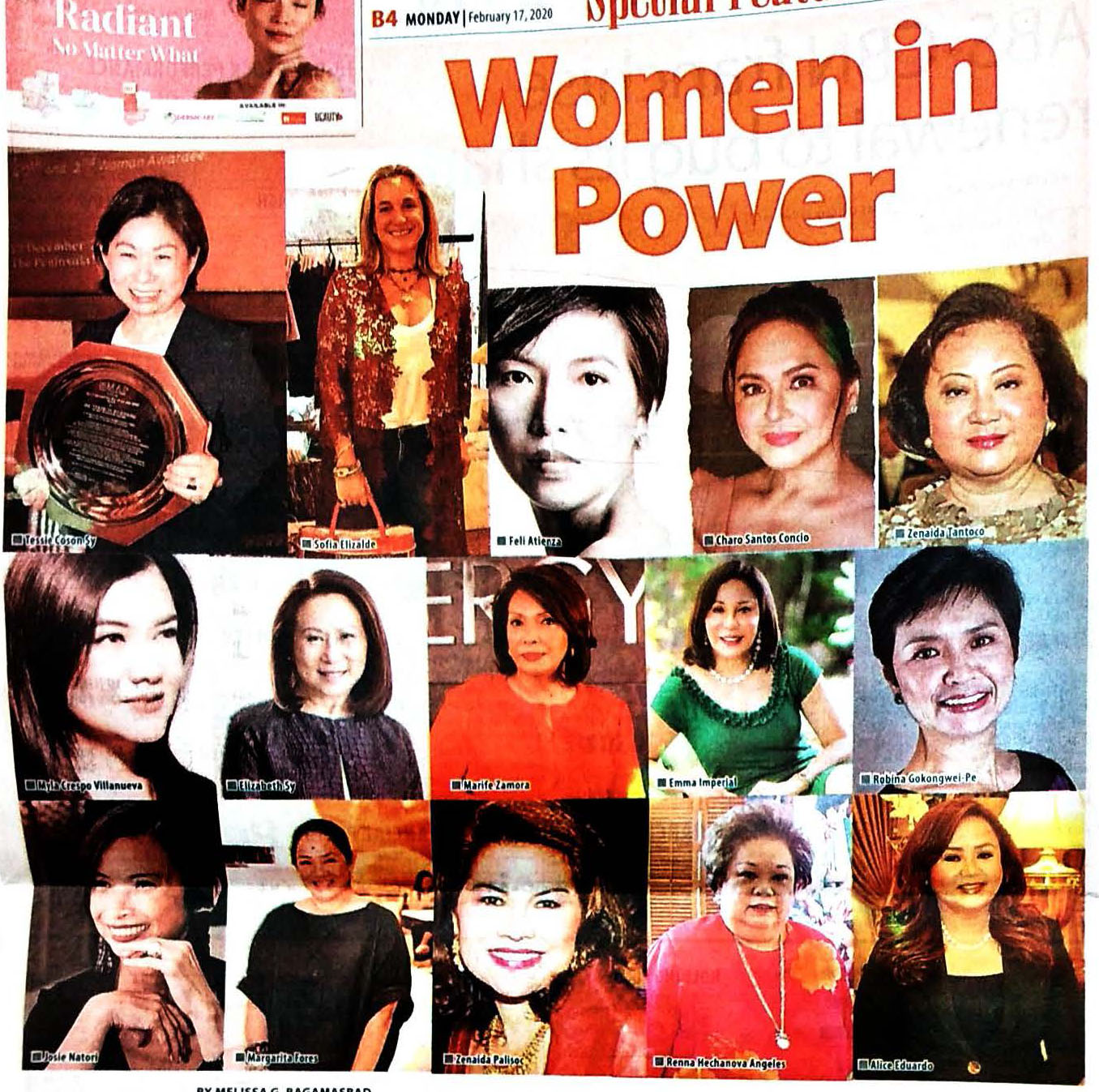 Women in Power – The Manila Times

ByMelissa G. Bagamasbad
February 17, 2020
THE Philippines rose to the top 10 position in the Gender Global Gap report released by the World Economic Forum in 2018 as one of the nations where men and women were more equal based on economic participation and opportunity, educational attainment, health and survival and political empowerment. Though the country slipped to the 16th spot last 2019, the Philippines still enjoys a place within the top 20 countries throughout the world. Global recognition aside, Filipinas have been trailblazing and making a making an indelible mark in their respective industries even before patriarchial systems and institutions began to recognize and reward their invaluable efforts. Their numerous names and achievements flutter in the mind like an airport flipboard at peak season, but here are top tier movers and shakers of the republic who just happen to be mothers, wives, sisters, or daughters too.


Emma Imperial: Iconic woman behind Imperial Homes
With more than 30 years of experience, the president and chief executive officer of the Imperial Homes Group of Companies has gotten to where she is not just due to her skills but also due to her dedication and positive outlook in life. While other might real-estate magnates might be drawn more to projects with bigger profit margins, Emma Imperial has stood steadfast in her mission to build affordable homes for all Filipinos. Imperial Homes Corporation can credit much of its success to the courage and determination of their leader. Imperial has not only been able to set up numerous cost-effective communities, but she has also improved and elevated the low-cost housing segment with her bold ideas and innovative solutions. (See related story on B5)

Written by Mark Virtucio on February 17, 2020. Posted in News and Events

Now is the best time to make your dream home a reality with our Year-End Price Off! Get as much as Php 100,000 discountfor our solar powered homes built using Ultra High-Performance Connovate concrete technology developed in Denmark. Built with superior earthquake, typhoon and fire resistance. Homes that will last a lifetime.

Written by Mark Virtucio on October 10, 2019. Posted in News and Events

Imperial Homes Corporation was established in September 16, 1983 and is primarily engaged in the development of modern leisure villages.
read more…